More and more robots are entering into Chinese Metalworking Parts Factory,  badly needed to take the role the Chinese deligent workers, who found themselves in a very good position in labor market. In 2013, many of the workers, particularly those who was born after 1980, seem disappeared in the market, while a lot of manufacturers have bigger and bigger difficulty to hire workers. 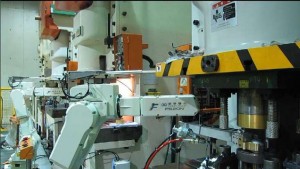 Lots are discussing where the labours have gone, there are several reasons:1. One family one child policy have resulted the low growth rate of population for almost thirty years, the country is aged already. 2. Campus accommodated more students, and the students are very reluctantly do the jobs in workshop, they prefer working in office, even income is relatively lower, and their parents already became richer because of decades of booming economy.3.Young people are getting more and more digitallized than they had been. Some of them are indulgent  into the computer games, lost the ability to work with people in reality.

Stamping industry need more robots to shoulder the hard works in their shops, because their human competitor becomes more and more unreliable, and reluctant to work.